To all the Microsoft IT Pro techies out there, Microsoft made the Windows Server 2012 and Windows Server 2012 R2 TechNet Library Documentation offline to be downloaded as a PDF. This (approximately) 7500 page document contains in depth technical content authored by the product experts. Happy reading

It can be downloaded from

One of the limitations in Winos 8 was that we could not set our desired wallpaper/background to the new start screen. Instead we had to select with some images/designs Microsoft has provided by default.

With the release of Windows 8.1, Microsoft has included an option where we can have our desktop wallpaper as the start screen background. To enable this option there are 2 methods

1) Right click on the task bar and select properties

2) In the properties Taskbar and Navigation properties window, click the navigation tab and check the “Show my desktop background on Start” option and click OK

1) On the start screen charms bar, select the settings charm 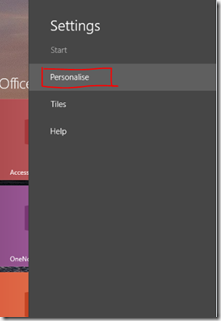 One of the complaints with Windows 8 was that when the computer boots up/starts up it goes to the new Windows Start screen instead of the traditional Windows desktop. The new start screen is a bit of a complicated area for someone who is not IT Savvy or new to computers.

There were many 3rd part utilities which were made available to tweak Windows (modify some registry keys) in order to make Windows 8 boot directly to the desktop.

With Windows 8.1 Microsoft took the valuable feedbacks from its customers and reintroduced the start button as well as gave the option to boot directly to Windows desktop instead of the new start screen. To do this, 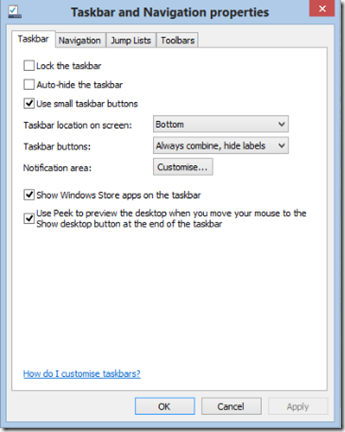 3) Select the highlighted option (checkbox) and click OK. you are done 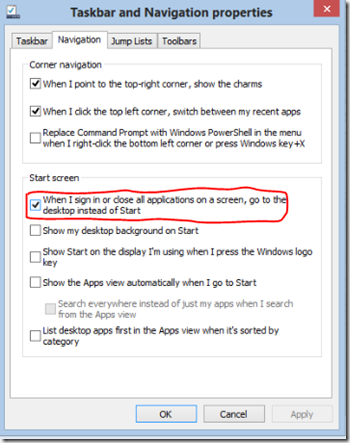